Innocent until proven guilty does not work in social media.

It is a safety process.

A legalistic process does not scale.

Blocks can always be removed once a fediverse instance gets their moderation process up and running.

Not silencing or suspending instances who allow abusers to run rampant, intentionally or not, harms people.

Sean Austin recently wrote about the internet becoming even more like TV under the influence of TicTok (a platform that launched a thousand panics) and YouTube Shorts, describing it as channel surfing through thousands of Public Access Cable TV channels.

The YouTube video essay is the Public Television show of the internet (think of Burke’s Connections and all the BBC seriousness parodied by Dianne Morgan’s Philomena Cunk.) It has motion graphics, citations, bespoke soundtracks, production values, and sponsorships (from the audience via Pateron, as well as questionable libertarian operations like 80,000 Hours.)

And there’s the subgenre of YouTube essayist who presents in as many costume changes as pop star’s arena show.

These creators are making fantastic work, discussing important ideas (and yes, reader, I support their Patreons) and the video essay works fantastic when talking about film and tv (um, long and short form video.)

But sometimes, I wonder if what I’m watching is a blog post with cosplay, that’d be easier for me to read than watch.

This line from Nilay Patel’s excellent synopsis of the Question of Twitter has been quoted often today, the first day of Nazi Space Boer’s tenure as owner:

I want to expand that.

Soon after I joined Mozilla in 2015 to improve how we were handling bug reports, it became clear that Bugzilla was a social network, which also requires content moderation.

Content moderation in Bugzilla is a means and not an end. It’s noise reduction.

On Bugzilla and other public bug trackers, moderation means (non-exhaustively:)

Good moderation is important, but it means I can get to the important stuff: my friends’ posts, funny posts, good posts, or the bugs I need to take action on; instead of abuse, spam, and fake bugs.

“I’m writing because I’m hoping the people who read it don’t need dollops of hope or good endings but are reading so that they’ll know what to fight, and fight even when the fight seems hopeless.” – Mike Davis

Mike Davis’ City of Quartz changed my understanding of what power, policing, and “criminality” were when I read it 30 years ago. It’s one of the many reasons I ended up leaving economics.

Tariq Ali has a remembrance of him (where I found the above quote) at Verso Books’ web site.

It's a gift economy that burns ammonium perchlorate. 🚀

A month on, I’m still pleased with my decision to get a 3D printer.

This coming weekend, the rocketry club I’m a member of will host a launch just south of San José, and several people new to the hobby want to attend but won’t have the kits they’ve ordered built or delivered in time.

I can have a batch of rockets ready for people new to the hobby in a little longer than it takes to print them (22 hours.)

I mentioned this model in a previous post and did a test print last month. 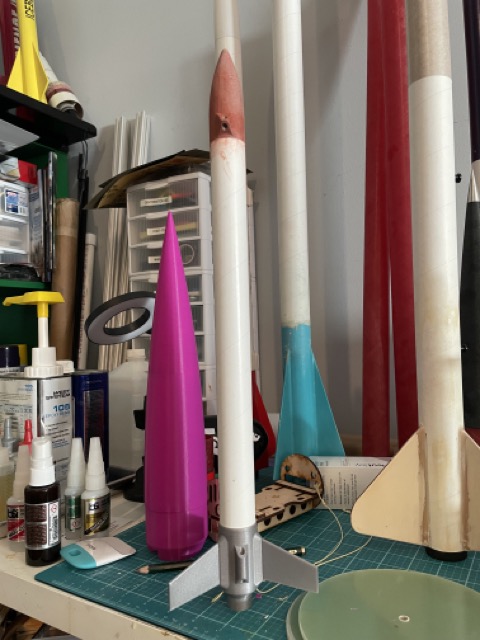 I’ll get them set up with recovery harnesses and streamers so all people need to do is slip on the body tube, load a motor, pack the recovery train, and put it on the launcher.

This little bit of just-in-time fabrication is great to have at hand.