The Winner's Curse, Blaseball, and self-deception

My need to make things more complicated made itself a little more clear this morning.

I was thinking about Milgrom and Wilson’s Nobel Prize in Economics, announced this morning, for their work on the winner’s curse in common value auctions.

It’s the realization that when you only have an estimate of something’s value, if you are working from a biased estimator, you could end up overpaying for the item. Like the cat in the illustration above who thinks there’s over twice as many fish in the bin as there actually are. (Much respect to the prize committee for thinking of cats and fish for the explainer.)

Meanwhile, I’m placing my bets (it’s all non-convertible, in-game currency) for the next hour’s games of Blaseball. Each upcoming game has summary odds for which team is more likely to win. 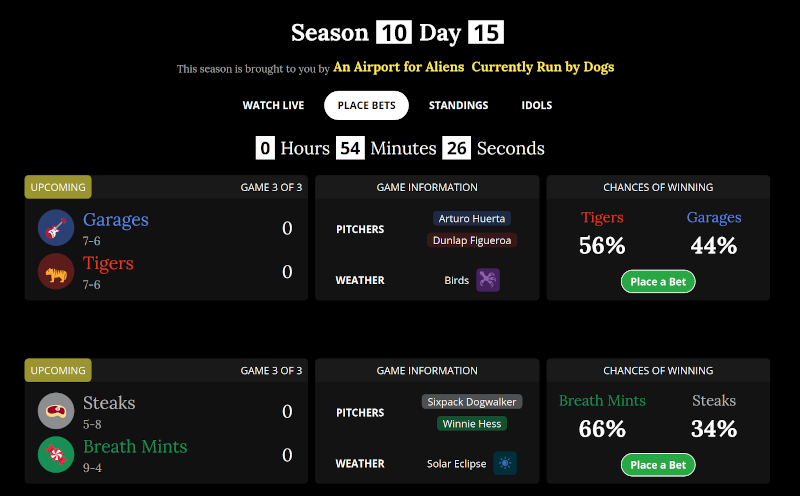 If you trust that estimate, then the optimal betting strategy is to make the maximum bet on the predicted winner for each game*.

Then I started second guessing the strategy.

But what if there’s additional information I could use to bet? That’s in the game’s code and configuration parameters which we don’t have access to. We can find proxies for this (other players diligently collect stats at the player, team, division, league, game, and season levels) and one could build models.

But if the summary statistic isn’t a lie or a trick, then those models should only reduce the variance.

While there are cases where trusting the model (like Milgrom’s common value auction) can get you in trouble, most of the time when you see a 70% chance of rain, you bring an umbrella and don’t look for ways the weather forecaster is trying to trick you.

I don’t know if it’s human or just American to not trust the forecast. It does seem to work on Americans often, with our distrust of climate models, and willingness to fall for ponzi schemes.

It’s an easy thing to get sucked into, be aware of it.

* Because Blaseball is a comedy horror survival game with elements of fantasy league baseball, there are effects which aren’t priced into the summary odds for the next game, such as when an away team loses in the bottom of the last inning (play continues after the winning run scores) and the losing team may start the next game with a negative score. You can only bet on the upcoming game while the current is in-play, so if a team has carryover ‘shame’ from a loss, that is not priced into your bet.