I haven’t flown a model rocket in forty years. In July of 2021 I drove down to the Mojave Desert to fly the largest I’ve built to-date, on the biggest motor I’ve ever used, to get my first high powered model rocket certification. Some parts of model rocketry are still familiar to me, but many things have changed. 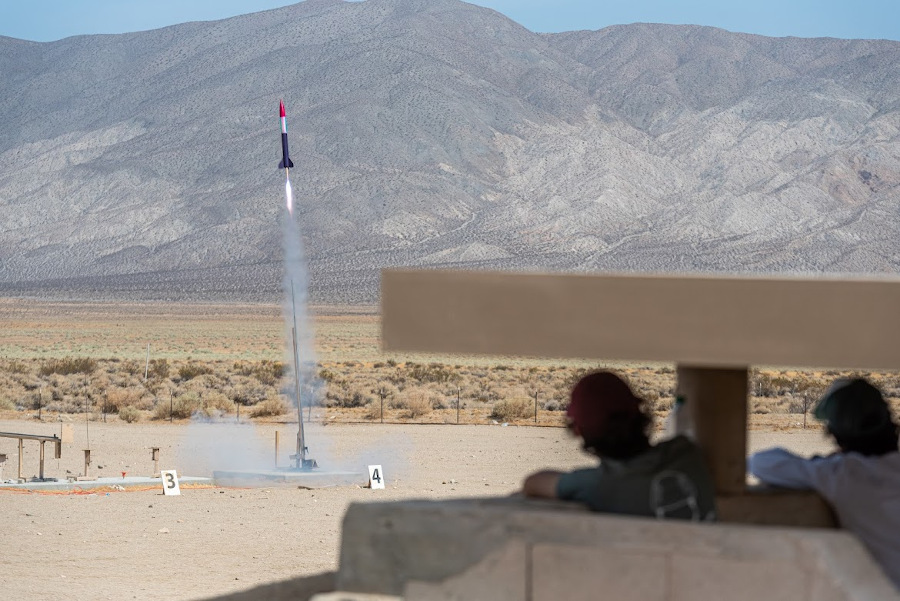 What’s interesting to me is how much of the change has been driven by computers.

The kit I built and flew for my level one certification is the LOC Precision LOC IV. It came with laser cut plywood fins and rings for mounting the motor in the main body tube. Computer controlled laser cutting tools make it economical to produce specialty kits like the LOC IV which don’t sell thousands of units.

Without a laser cutter, you’d have to fabricate a cutting jig for each design or kit, and that jig would have to be replaced periodically. And your break-even point would require you sell more units.

Also, with a cutting jig, you’d be limited to making fins out of balsa wood, which is lighter, but not as strong, or replacing the cutting jig sooner if you used it on plywood or other materials. 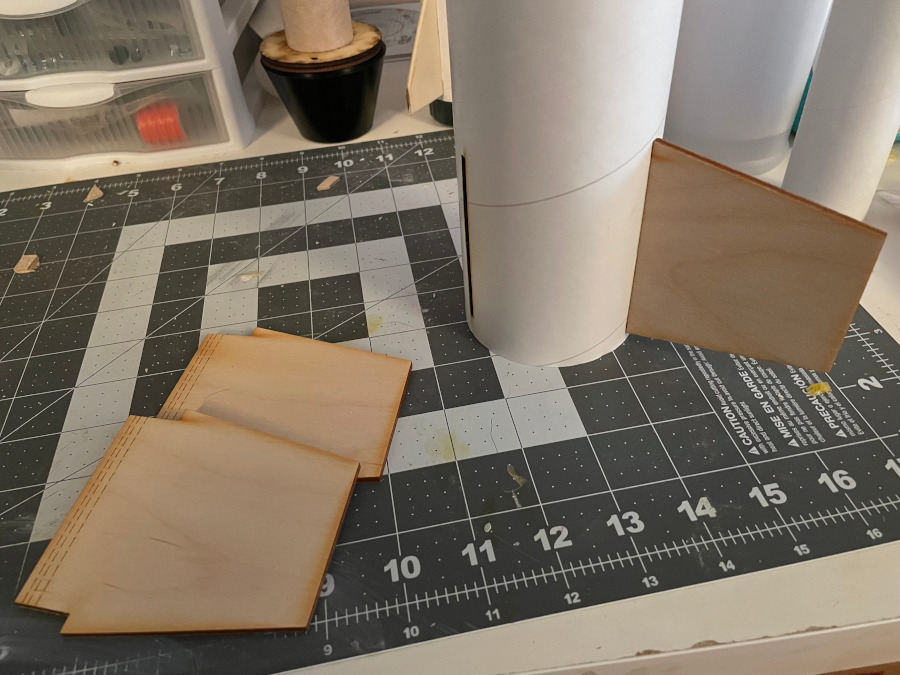 Accurately cut fin slots also make it easier to mount fins straight so your rocket doesn’t end up spinning around the long axis as it flies.

3D printing is showing up in more model rockets, mainly as nose cones, or internal structural parts, such as the engine mount Joe Barnard uses in his thrust vector controlled rockets.

Using 3D printed fins in high model rockets is still experimental. For example, Clark’s rocket, shown below, had a printed fin can, and flew successfully for his L1 certification. While another rocket, entirely 3D printed, broke apart. 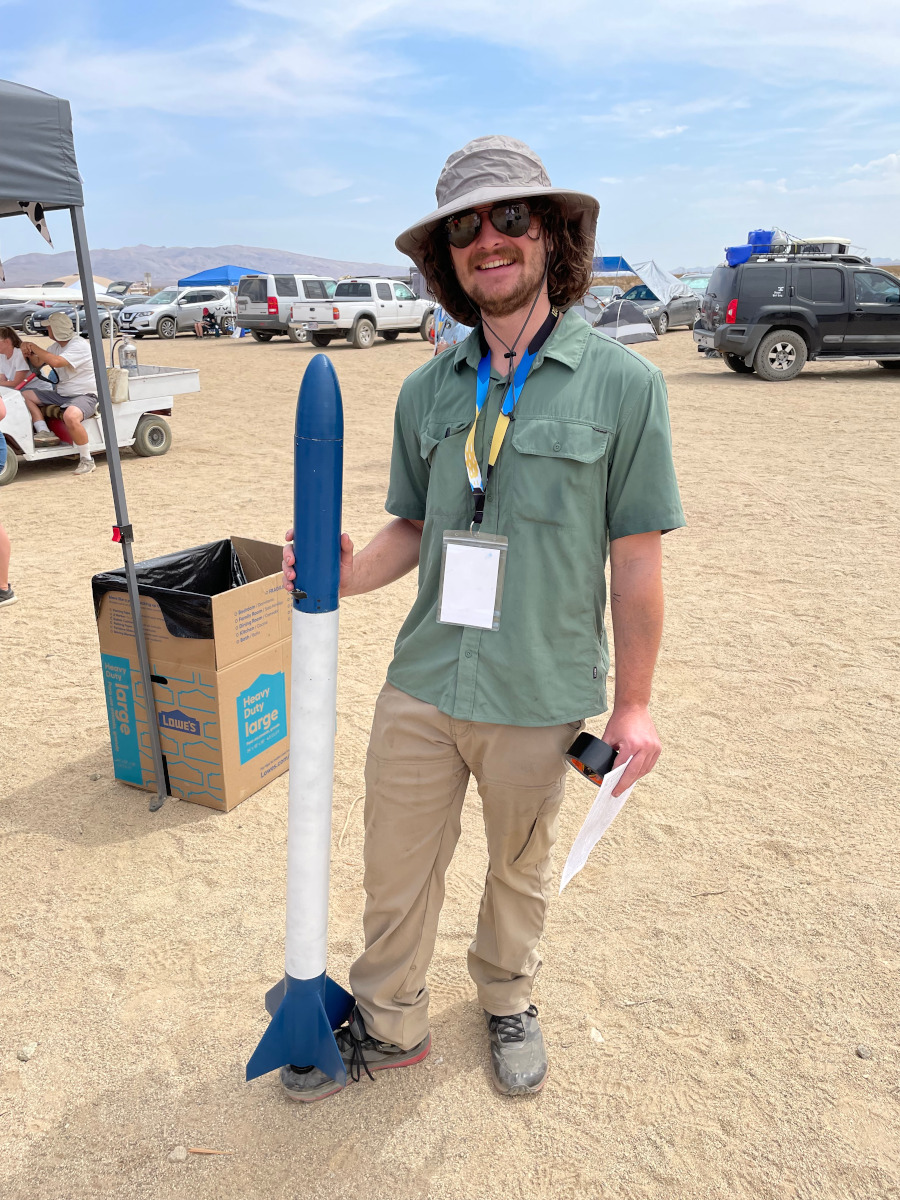 Custom decals are now common. You can make a SVG file in Inkscape or Illustrator, and send it to a shop which will produce a vinyl decal, or you can do it yourself with a wirelessly-controlled stencil cutter like the Cricut. For my rocket, I sent files to Stickershock and got decals back in less than a week.

Now you have software like Open Rocket and RockSim which will calculate your rocket’s centers of gravity and pressure for you so you can adjust your design before building it. 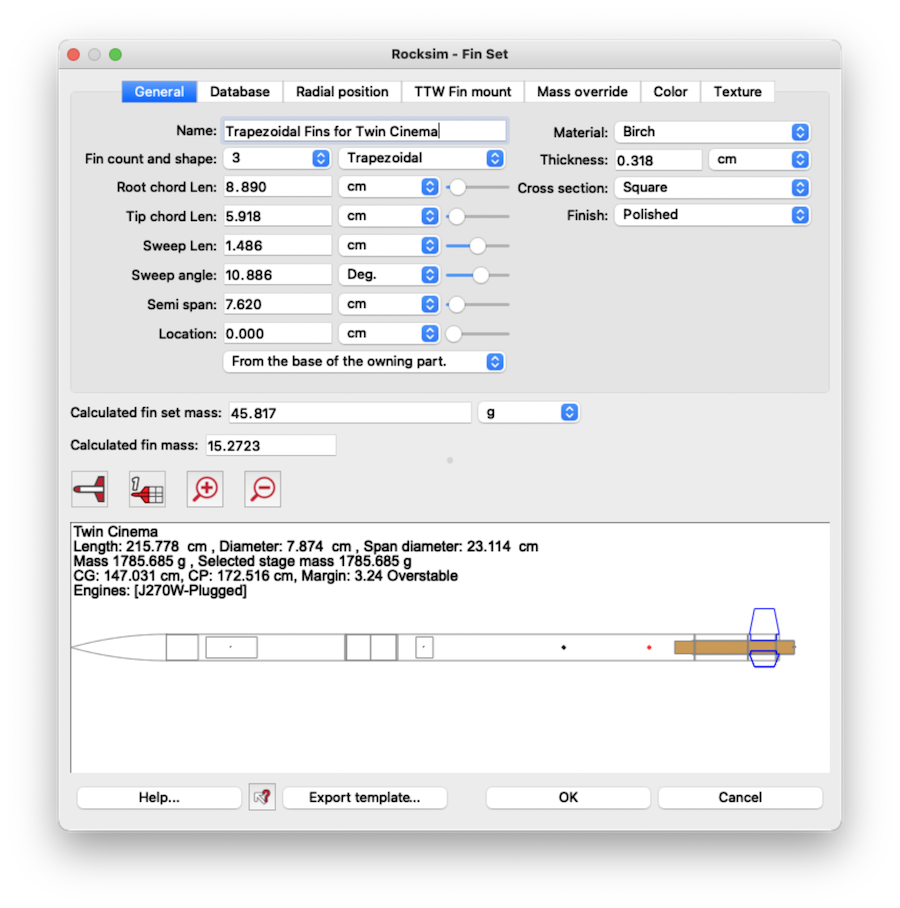 Software can also simulate launches with different motors so you can build an estimate of how high it will fly, and the optimal time to eject the parachute.

And the programs will generate templates for fins and other components as SVG files you can send to your laser cutter, or to a bureau who will cut them for you.

You can go to vendors such as Adafruit, DigiKey, and Pimoroni to buy boards with digital altimeters and build and program your own avionics. Or you can order a flight-ready instrument such as the Jolly Logic Altimeter 2 which not only have altimeters, but accelerometers, and other sensors to measure information from your rocket. 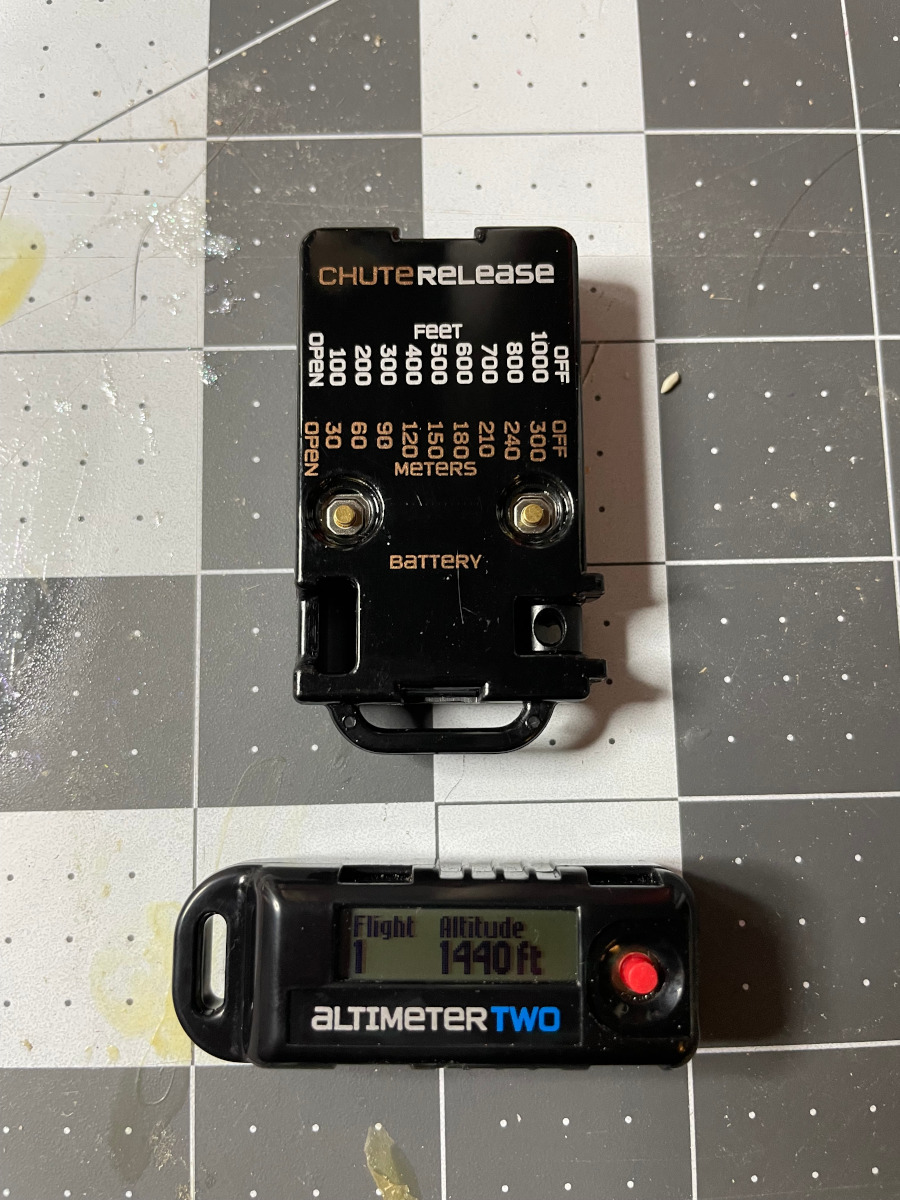 These devices are accurate, inexpensive and free up multiple people who would had been measuring, recording, and reporting the elevation and azimuth of the rocket’s apogee from tracking stations (which was a thankless task, even when summers were milder than the current hellscape.)

40 years ago, electronic staging of model rockets used mercury switches to detect the end of thrust, and a capacitor (charged right before launch) firing a flash bulb small enough to fit into the nozzle and against the grain of the sustainer motor. A member of the model rocketry club of my teen years, G. Allen Wilcox, described one such system in the National Association of Rocketry’s magazine.

Now a digital accelerometer can detect motor shut down and wait a specified time before igniting the sustainer using a relay.

It can also detect apogee and fire a small black powder charge to eject a drogue parachute, as well as a second charge at a specified altitude to deploy a main parachute.

This dual-deployment technique is critical for recovering model rockets flying 10,000 feet and higher without the rocket drifting into the next state or county.

If you’ve watched a SpaceX or ULA launch, you’ve seen video from cameras attached to the rocket.

There were film cameras for model rockets, which shot specialty film, that had be sent off for processing because of the non-standard negative size.

Carl Weingarten made a lovely video essay on the Estes motion picture rocket camera, the Cineroc, which used Super 8 film.

Now video cameras are small and easy to attach to the side of a model rocket.

Unless you’re buying a mass-market Estes kit at a big box hobby and craft store, you will probably buy from specialty online retailers instead of hobby shops. 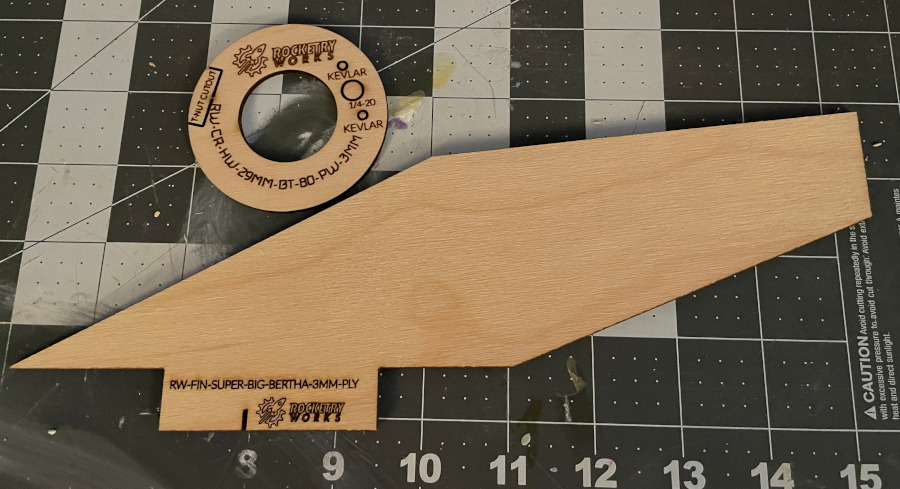 I had first thought of this blog post in terms of “how has building and flying model rockets changed since I last did it?” But as I went through all the changes, it became clear that inexpensive computing power and the internet were driving most of them.

Rocketry is still fun, even with the new technology. Launching my certification flight was a thrill, and I’m looking forward to getting back on the range soon.

Thanks to Friends of Amateur Rocketry, whose range I used, Hot Nozzle Summer who organized and ran the launch, and all the rocketry and space industry folks I met who provided advice and support.

The launch took place on the lands of the Kawaiisu people. 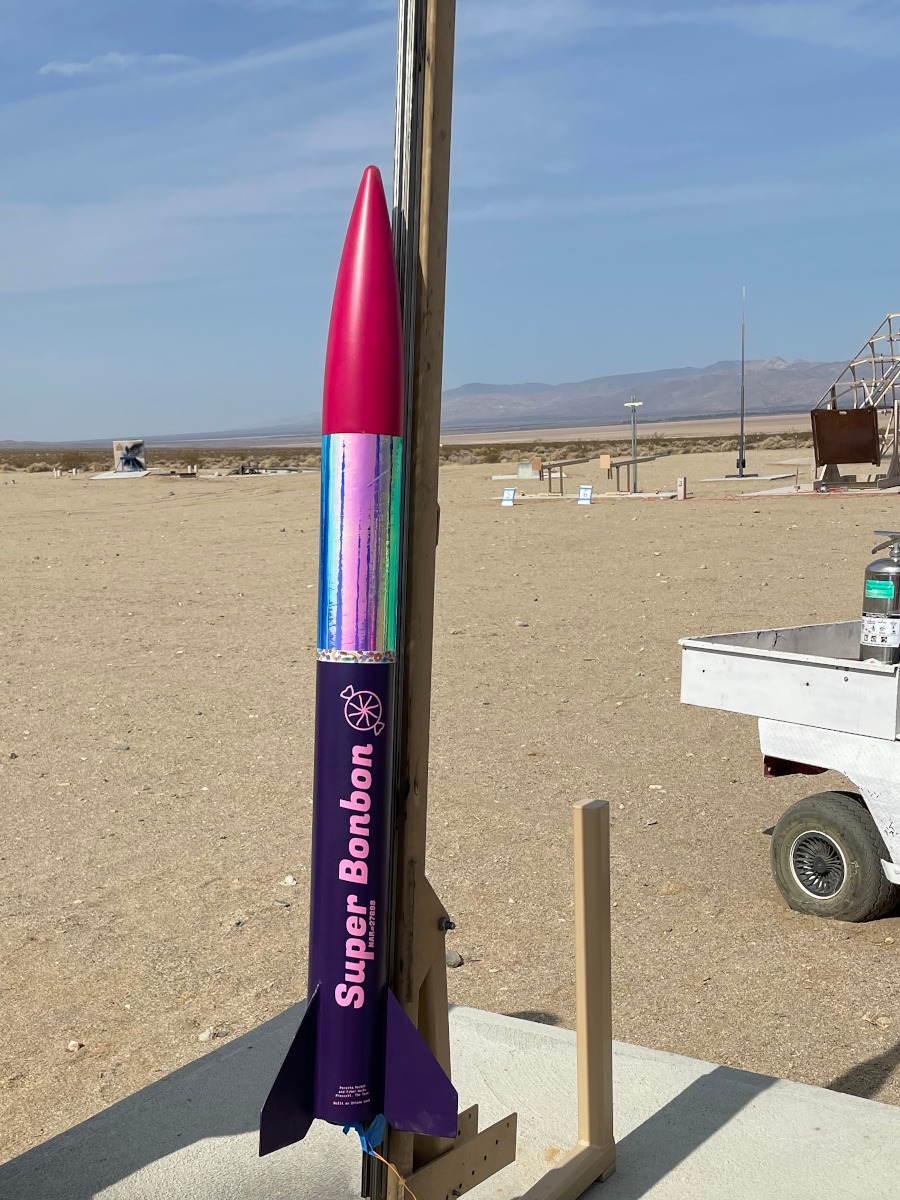